The issue
• The owners of the River Club in Observatory, Liesbeek Leisure Properties Trust (LLPT) have submitted an application to build a mega-development of commercial and residential buildings four times denser than Century City, on a protected floodplain and conservation area that has huge environmental and heritage significance for the City of Cape Town (CoCT) and its people.
• The CoCT, Province and LLPT are now working to overturn years of intensive public consultation that was ratified by CoCT to protect one of Cape Town’s largest ‘green lungs’ as an upgraded open space with facilities for public good. Many questions surround the sale of this property.
• If approved, this development will destroy the flood plain and the fragile biodiversity of the area, while ignoring the cultural and heritage significance this space holds for the First Nations people and all South Africans. This development represents the capture of public land earmarked for natural and heritage conservation, and will set a catastrophic precedent for all heritage and ecologically sensitive areas across Cape Town. It will signal that protected, sacred land is available for private profit and that CoCT- mandated public consultation and community opposition can be ignored. 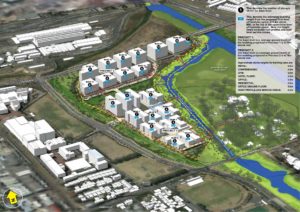 What you need to know
About the River Club and vision of Two Rivers Urban Park (TRUP)
• The 14 hectare River Club site falls within the Two Rivers Urban Park (TRUP), a 240-hectare zone which comprises sensitive ecological systems and habitats, extensive open space areas, significant institutions, historical buildings and cultural landscapes. The area is a sensitive wetland and regular floodplain on the confluence of the Liesbeek and Black Rivers, and is home to protected fish, bird and toad species.
• The Khoi peoples lived and grazed their cattle at this river confluence for centuries. It was a sacred gathering space called Igamirodi – ‘the place where the stars gather’ – that is today home to the historical Astronomical Observatory (SAAO), a National Monument in line for World Heritage Status.
• Jan van Riebeeck appropriated the land and gave it to Wouter Mostert to farm in 1657. The first resistance battles were fought by the Khoi in this area, which became known as the First Frontier. This included repelling an invasion by a Portuguese colonial expedition under d’Almeida in 1510. The area’s historical significance has been debated in Parliament, supported by the Department of Arts and Culture and confirmed by Heritage Western Cape.
• Under the current TRUP Contextual Framework, the land surrounding the River Club buildings and golf course is an area of sensitive biodiversity and intense cultural and heritage significance requiring protection.
• The River Club area is therefore zoned as private open space with consent uses. This allows the River Club to operate limited business activities as ‘consent use’ in parts of the existing facilities, but confers no development rights to the land, unless approved.

The sale and proposed commercial and retail development of the River Club
• Until 2015 the River Club owners, Liesbeek Leisure Properties (LLP), leased the land from Transnet, the state-owned railway company which built the original Railway Service Club House. In 2015, LLP created the subsidiary company Liesbeek Leisure Properties. Liesbeek Leisure Properties Trust, which bought the 150,000 m2 land for R12 million, around R80 per square metre, well below market value. It was then revalued almost immediately for R100 million by Investec due to its perceived development potential.
• The sale has effectively hidden investors’ anticipated profit margins and has been publicly questioned for its legality. LLPT, supported by developers Indigo Properties and Zenprop, which is owned by Investec, as main drivers of the project have now applied to change the current zoning of the property for development.

What is currently happening?
• Given the vested interests at stake, a complex battle is now at play between LLPT, Province and City authorities and affected communities. The developers require approvals from numerous decision-making authorities, some of which overlap. The mandatory Environmental and Heritage assessments have led to ongoing disputes. Over 400 public objections have been made against the development.
• Heritage Western Cape (HWC) has implemented a provisional protection order valid until March 2020 to allow for a full assessment of the true heritage value and grading of the site. The developers, Province and CoCT have appealed this protection order.
• CoCT must sell or lease 11 further parcels of City land to make the site viable for the developers. Of the 11, four are zoned as public open space. CoCT would therefore alienate public land for private interests.
• The current Local Spatial Development Framework (LSDF) process is bypassing the five-year consultation process with residents and numerous stakeholders of TRUP, and is pushing for the area to be rezoned as mixed-use. This will provide the leverage the developers need to proceed.
• CoCT and Province support for the developers reflects a broader movement of patronage and corruption by authorities across Cape Town in favour of inappropriate development over public interests and environmental sanctity. Areas under threat include the Philippi Horticultural Area, Princess Vlei, Maiden’s Cove, Bo-Kaap and now the Two Rivers Urban Park.

What is the Liesbeek Action Campaign (LAC)?
• The LAC is a coalition of concerned citizens and community activists who strongly oppose this proposed development and defend our community’s right to a pristine, publicly accessible environment with protected heritage sites, safe from private profit.
• We want to see the Liesbeek and Black River Flood Plain protected as a Park with National Heritage status, in line with the Two Rivers Urban Park Contextual Framework and Management Plan, as co-designed with local communities and stakeholders and ratified by CoCT.
• We support applications for World Heritage Status for the long-term protection and upgrading of this area’s fragile ecosystem, and recognition of the area’s Khoi heritage.
• We envision an ecologically sustainable protected wetland, bird sanctuary, and riverine complex along with a heritage and cultural centre focused on the history of the site and its relationship to some of the defining moments of South Africa’s colonial history.

Visual Representation of the Proposed Developments

Before and After Images extracted from the Visual Impact Assessment Document
from the BAR Report. 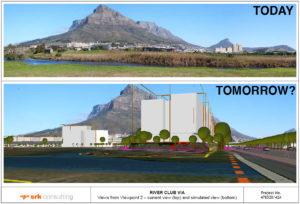 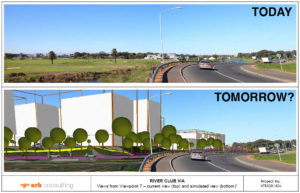