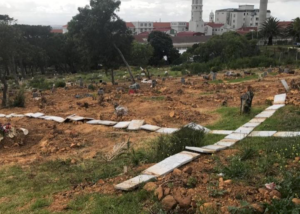 Introduction
Early this past Wednesday morning during the normal inspection by the caretakers of the cemetery reports was received on acts of desecration of the Mowbray Muslim Cemetery situated on Browning Road, Observatory.

Investigation
I met with caretaker Mr. Ismael Abrahams who informed us that around 8:15 AM the graves were found to be disturbed. Tombstones of approximately 80 graves were removed and placed across the top section of the graveyard is the position of an upside-down cross. Adjacent to this is open graves that were being dug up and prepared for burial purposes by the cemetery personnel. Here in these graves, tombstones were placed in triangular shapes, further desecrating the graves.

It would appear that the offenders scaled the back parts of the wall parallel to the road, and proceeded from there to the top of the cemetery to engage in their activity.

According to the caretaker, SAPS arrived in the morning at the cemetery but did not take any forensic evidence nor did they proceed up the incline of the hill to inspect the desecration.

Upon reporting to the board of the cemetery, the caretaker was instructed to restore the gravestones but encountered some problems because a floor plan had not been established yet because the top of part of the cemetery where the incident occurred was the most recent burials. To counter this, community announcements followed on radio, and across the various public platforms including those known to the Islamic community requesting the family of the deceased to come to the cemetery to help relocate the gravestones. It was unfortunate to hear of the trauma experienced when family members discovered the relocated gravestones were done so incorrectly while reeling from the shock of the desecration committed earlier.

At 5 o’clock community members were still streaming in.
I was moved by the dignity, and composure by family members in the face of this gross human injustice.

OCA Condemns these acts of inhumane and gross violation. 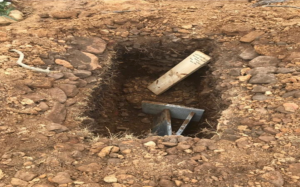 The Observatory Civic Association condemns in no uncertain terms these unlawful and malicious acts of burial disturbance.

We wish to express our shared pain and support with the Islamic community, and call upon all our community, including religious organizations, NGOs, and community-based organizations in the area to join our response in peaceful solidarity.

The pain caused to the families resulting from these violations is unspeakable. The disturbance of the sacred remains is a disturbance not only the graves affected, the families, the cemetery itself, but also to the spiritual well being and sense of collective cohesion we share as a diverse community of tolerance with respect for one another.

We call upon the SAPS to expedite its duty in the fullest to bring to book the individuals who committed these crimes against humanity. We have requested that the camera footage of all connecting interchanges to Browning as well as any other surveillance equipment in the area be investigated. We call upon anyone with information that may assist the investigations to please contact SAPS.

We will be consulting the families affected and the Muslim Community leadership about what action would be appropriate as a peaceful public statement of outrage at this desecration. As soon as we hear further, we will invite the entire Observatory Community to join the action in solidarity. In the meanwhile, we invite the community to send messages of support and any statement you wish to make to ​info@obs.org.za and we will make those available. It is important that we demonstrate our commitment to the protection of our hard-won freedoms and rights in our Constitution, including the right to practice one’s culture and religion, respect for one’s beliefs, and expressions without fear or intimidation. The announcement of public action will be made as soon as the arrangements have been confirmed.

An Observatory lineage of religious tolerance and human rights activism
To quote former resident and cultural activist and historian Patric Tariq Mellet, from an interview on the History of Observatory

“​Among the emergent middle classes that took root from the 1850s were strong Muslim and Jewish communities. Many of the Jewish community were left socialists and likewise, among the Muslim community, there was also a strong progressive and left orientation. Hadji Ojer Ally who had come out from Mauritius was the prime campaigner for the establishment of the Muslim Cemetery in Observatory. He also was one of the early activists in the formation of the African Political Organisation of Matt Fredericks and Dr Abdurrahman. H O Ally was highly active in the African and Indian congress movements in Kimberly and in Fordsburg and he accompanied Gandhi on his trip to London to petition Parliament. Rivonia trialist sentenced with Nelson Mandela to life imprisonment, Denis Goldberg also grew up in Observatory and has wonderful stories of his Jewish childhood in the area. He is one of many who served in the national liberation movement who lived at one time or another in Observatory – Christian, Muslim, Jew, and Atheist who started their resistance road on the streets of Obs. As can be seen from its historical roots, that ‘resistance fighters’ associated with Observatory go a long way back. “

May we never forget the human ties that bind us as a community. 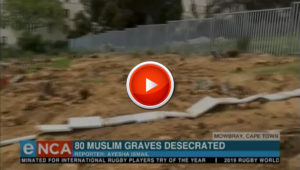