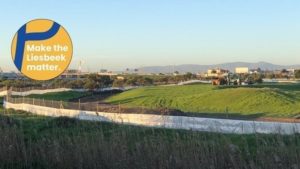 Today, the Observatory Civic Association lodged an appeal against the Water Use License issued by the Department of Water and Sanitation for the re-development of the River Club.  Our appeal was lodged with the Water Tribunal under a section of the National Water Act, which provides Interested and Affected Parties the right to appeal a Water Use License decision.

The Act also indicates that, while the matter is under appeal, the award of the license is suspended. This means that the LLPT may not commence any activities for which it has received authorisation until the appeal has been decided.

We would therefore expect the LLPT to desist from any further building activity on the site that would pre-empt the appeal process. We have asked that they respect the legal process under the National Water Act. However, it seems from the image above that the LLPT are continuing to move soil on site. While the LLPT accuse us of attempting to ‘discredit the legal process‘, it seems they are the parties who don’t want to recognise that the National Water Act appeal process means they can’t continue to infill the River or alter the floodplain.

We note that the views of the City of Cape Town Environmental Management department, as contained in their appeal against the Environmental Authorisation for the re-development, raised many similar concerns about the development’s impact on water resources and further support the fact that license should not have been granted.

While this appeal may run out over months or years, the OCA is still resolute in taking the rezoning decision and Environmental Authorisation on review to the High Court.

Anyone wishing to support us financially to seek justice in this matter can do so here.