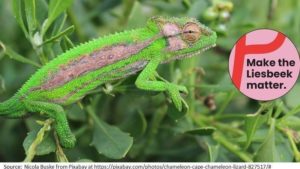 In March 2020, Jody Aufrichtig claimed in a letter to the Cape Argus newspaper that “The River Club site is in fact severely under-utilised, closed to the public and degraded, with some parts being used as a rubbish dump.”

And not included here are the fish and the birds. So, a rubbish dump? Doesn’t sound like it to me! I’d say there’s lots of life on this land.

The South African National Biodiversity Institute (SANBI) notes that the Cape Dwarf Chameleon is listed as Near Threatened on the International Union for Conservation of Nature Red List. Although SANBI notes that national parks and provincial nature reserves protect about 40% of its habitat, they caution that “this species is under threat as it has lost significant pieces of its habitat to urbanisation and agriculture … Climate change over the years could have a negative impact on their suitable habitat, lifespan and distribution. The fact that these chameleons are in areas that are fragmented are causing loss of gene flow between subpopulations, which could cause a low recovery rate if anything adverse should happen.”

As for the Western Cape Leopard Toad, we know that is it highly threatened and the River Club land is a breeding site. Not surprisingly, the City’s stormwater experts commented that “The proposed infilling and conversion of the river channel to a stormwater swale will alter the green infrastructure engineering and ecological value of this site.” The Environmental Management Department of the City further point out that “Once the habitat of the Liesbeek River Conservation Area has been destroyed through infilling, there will be no movement of animals from there anymore. The paths across the River Club site they used to traverse, will be empty and unused. The need for the ecological corridor arises from the significance of the habitat of the Liesbeek River, and the need to maintain the ecological linkages across the River Club site, for frogs, otters and birds which move to and from the Liesbeek River and the Raapenberg wetlands, noted by various specialists and members of the public. With no life left in the Liesbeek River, the raison d’etre for the ecological corridor falls away.”

The claims by the developers that this is a dumpsite of little ecological value are simply a misrepresentation of facts – facts that they can’t now deny because they now have the scientific evidence.

The land is not a toxic waste site. It supports important species, some of which are threatened. It certainly can do with rehabilitation and improvement. But to pretend that the only way to improve it is to truck in tonnes of infill, lift the land, bury the river and lay 150 000 square metres of concrete on site is simply fallacious. It will not only destroy the intangible heritage of the area, but it will threaten the ecological value of the Riverine Valley, replacing it with a Century City style development, where Amazon will be presiding.

We are going to challenge the rezoning, the environmental authorisations and the Water Use License and we believe we have strong grounds to do so.

Anyone wishing to support us financially to seek justice in this matter can do so here.