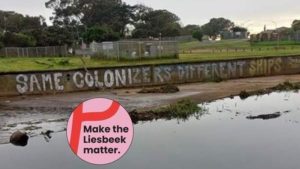 Today the LLPT announced news of an event featuring a so-called Social Compact between the developers and the First Nations Collective (FNC). This is not surprising though it is rather illogical.

A Social Compact is an implicit agreement among the members of a society to co-operate for social benefits, for example by sacrificing some individual freedom for wider social benefits in the form of state protection or welfare.

What has been effected at the River Club is an agreement between two private partners, negotiated in secret, for private, not social benefits. The so-called ‘social benefits’ appear to exclude the majority of Khoi groups who oppose the development, not to mention the rest of society who believe that there are different ways to celebrate Khoi heritage and protect the environment.

That there is co-operation between the developers and the FNC has been evident since the FNC appeared on the scene for the first time in 2019. This came about after the developers were exposed as having no First Nation support at a 2018 meeting of the Heritage Appeal Tribunal. In fact, in 2018, the meeting room was full of Khoi chiefs, including a leader from the Gorinhaiqua, who were adamant in saying no to the River Club re-development.

But co-operation between private entities without transparency is not a Social Compact, even if you give it that title.

And the claim that the FNC speaks for all First Nations is a misrepresentation promoted by the developers who desperately need Khoi support for the legitimacy of their development.

Not one of these groups agree with nor are part of the so-called Social Compact.

How exactly can you have a Social Compact that doesn’t include wider society?

But what is most revealing about the event announcing the Social Compact was the willingness of Mayor Plato to welcome the agreement as enabling “descendants of First Nations people” to “have a place in our city that celebrates them as well as their ancestors.”  Yet this City administration did not bother to include the Two Rivers Urban Park with its rich history of Khoi resistanceon its provisional list of liberation route sites last year. Nor did it bother to repair the vandalised plaque celebrating Khoi resistance on the Liesbeek from August last year. The City only wakes up to what it calls the “inclusion of First Nations history and culture” when a Khoi Cultural Centre and amphitheatre appear on the Amazon mega-development plans.

What sort of ’place’ does the City think it is bequeathing to future generations, when the re-development will totally destroy the Open Space character of the Liesbeek Valley, identified by Heritage Western Cape as the sense of place that is the key heritage indicator that should have informed any development in the area? The space the City will ‘memorialise’ as Khoi heritage lies within the complex of 18 buildings comprising 150 000 square metres of concrete blocking views of the mountain because they are between 20 and 44 metres tall.

For us, this confirms what we suspected for a long time. The City did not want to have an open and transparent process to allow the area to be graded for heritage so they opposed the HWC’s Provisional Protection Order over the River Club in 2018 instead of helping to grade the area. The City has now welcomed Amazon to the Liesbeek and are trumpeting this ‘Social Compact’ to deflect their insensitivity to what has been described as an extension of van Riebeek’s colonial dispossession of the indigenous people – SAME COLONISERS, DIFFERENT SHIPS – as painted on the Liesbeek Canal by an unknown graffiti artist.

The City could have handled this development differently but they forced it through, ignored their own heritage and environmental experts, hastily assembled a Municipal Planning Tribunal in 2020 to rubber stamp a decision already made, made common cause with the developers to appeal heritage protection and have now joined in the developer’s own propaganda efforts.

On the 16th June, less than two weeks ago, Khoi groups, civics and environmental NGOs marched through town to celebrate Khoi history and our opposition to the re-development. We handed the mayor’s representative a petition of more than 50 000 signatures opposing the development. Many of the signatories made comments and many made were by people who self-identify as Khoi and who do not accept this secret compact handing rich corporates like Amazon the right to destroy the Liesbeek Valley. Here are some of these comments:

·         I belong to the Goringhaicona tribe and passionate about our Heritage grounds, it is our Khoi indigenous peoples right to have it preserved for our future generations;

·         I am a person of Khoekhoe origin who desires recognition for our heritage and history. Furthermore, I desire restitution for our people.

·         The proposed development will destroy our heritage and legacy of struggle

·         It is a Khoi burial ground, also international heritage, the battle of d’Almeida. One hears of the Zulu blood river but you don’t hear about the Khoena blood river.

·         Stop Colonising and destroying the heritage and history of the indigenous people!

·         I am a DIRECT DESCENDANT of the first people of South Africa and I have had ENOUGH of the violations against our people, our sacred spaces and history. ENOUGH!

Clearly, the City of Cape Town’s mayor could not have read these comments if he believes that there is any credibility to this private agreement between the FNC and the LLPT. True to form, our Mayor says one things but does another.

The City of Cape Town will one day have to answer for its collusion in this deception. That day might come in court.

Anyone wishing to support out campaign, including funding our court action to challenge the rezoning and Environmental Authorisation for the development, can do so at our fundraising site.