Notes of the Town Hall Talk – State of the Circus – held on the 9th April 2019, Observatory Community Centre 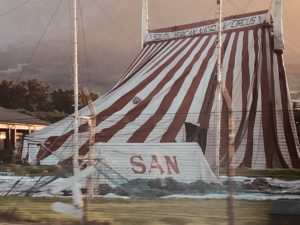 The meeting opened with Tauriq as OCA chair introducing the facilitator for the evening, Natalie McKaskill from the Lotus River-Grassy Park Civic. It was clarified this was a Town Hall meeting, open to all comers, rather than an OCA members meeting.

Two journalists were present. There was discussion whether the presence of the journalists would inhibit discussion. Allegations were made in the meeting that one of the journalists has already illustrated his bias in the issue. Another speaker expressed the view that there should be no restrictions on press freedom and that if what was written was untruthful or biased, it could be challenged publicly. In the end, it was said that the journalists would be able to stay but not record what people said or quote them without getting their permission. The meeting also decide not to support Edwin’s request to film the events.

The OCA deputy chair outlined a brief history of the Circus which has been operating as Circus School for some years in Observatory. At some point, the Circus ceased to be a Circus School and become unauthorised accommodation for people staying there since the property is not zoned for habitation. Conditions under which people stayed were less than optimal and the tenants had little say over the conditions. The existing lease ended in April 2018 and resident were not told about this at the time. A breach of lease notice was served on the circus on 20t h April by the City. City officials met with the Circus on 25t h April and 31s t May 2018. On 11t h June, City served notice on Circus instructing them to vacate by 13t h August failing which they would be served with an eviction order with costs. In July 2018, the City was told about the circumstances under which residents at the circus were being exploited, including allegations of intimidation, assault, kidnapping and extortion against the occupants. On 16t h July 2018, a notice declaring it a fire hazard was served on the circus. A third notice to vacate was dated 15th January 2019. All 3 notices were based on the fact that CoCT had terminated its lease with the Circus and thus considered the occupants to be unlawfully occupying the property. The third notice of 15 jan 2019 stated “should you fail to vacate the property by 22 February 2019” …”an application for an order of eviction will be brought against you.” The city has now instituted a formal eviction through the courts and that is the situation.

The OCA Communications Coordinator outlined the communication (see report below) with the City over the past few months. In summary, efforts by the OCA to establish the facts surrounding the circus from the city have been rebuffed. In particular, the response from our Ward Councillor has been to hide behind the claim that the eviction is subject to legal proceedings currently. It was pointed out that notwithstanding the evictions, most of the questions asked of the Councillor and the City were not relevant to the outcome of the court proceedings but were rather of a general nature related to the plans for the precinct. Despite this, the ward councillor declined to provide answers to the Community.

The discussion was then opened to the floor:

o An appeal was made that we need to work together as this has wider ramifications for the Two Rivers Urban Park precinct.

o Waiting for the City to solve the problem will not be helpful because the City will not make it a priority so we should be working out solutions ourselves.

o Via the Sub-council chair
o Petition to the City to get the Tent demolished
o March to the City
o Approach City Ombuds
o Encourage Press coverage
o Approach JP Smith to get urgency from the City on all matters affecting  the Circus.

● Address the tent safety issues as a matter of urgency

o Suggested to approach a local Obs resident with experience in building cleaning/climbing but a concern was expressed to avoid taking action without a professional opinion otherwise we would be liable if anything goes wrong.

o If we know what it will cost, we could crowd fund and/or use that to pressure the City

●  PAIA application to the City to get relevant information

The meeting closed with a clear understanding that even if there remain different perceptions about some matters, there is an urgency to address the issue – particularly the safety hazard posed by the tent.

Natalie was thanked for her chairing of the meeting.