A commemorative plaque, which was vandalised eight months ago, was restored during a march against the River Club development on Tuesday. Picture: Phando Jikelo/African News Agency (ANA)

Cape Town – The City of Cape Town and the Western Cape provincial government have come under fierce attack for “supporting”, through its recent decisions, the further trampling of indigenous land for profit – a phenomenon in the Cape that spans nearly 400 years.

Hosting a walk of resistance against the R4 billion River Club development in the Two Rivers Urban Park yesterday, organisers said it would take a push-back from everyone to prevent the DA-run administration from allowing history to repeat itself.

Khoi leaders and concerned citizens from groups including the Observatory Civic Association were in attendance.

The walk followed the City’s approval of the River Club development in Observatory, and followed the provincial Environmental Affairs and Development Planning department’s Environmental Impact Assessment (EIA) decision. The redevelopment, on 15 hectares of land, is set to include shops, restaurants, offices and a hotel, while US retail giant Amazon will be the anchor tenant.

Khoi people were dispossessed of the land centuries ago, and it became a place of war and indigenous enslavement. A commemorative plaque, which was vandalised eight months ago, was also restored, with the organisers yesterday saying the City simply never bothered to fix or replace it.

Boesak said the land was sacred. “We are sick and tired of a City administration and of a provincial administration that acts like a traumatised post-colonial, recolonising power … that can bow down before the statue of Cecil John Rhodes and the statue of Jan van Riebeeck, but spit in the face of Krotoa and Autshumato and Klaas Stuurman.

“What they propose is to take this sacred ground and to turn it into a development for some new liberal capitalists from across the seas, with friends and allies in this country. We will not let that happen.” 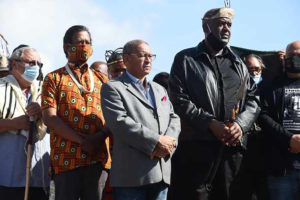 Jenkins said they were still in the process of consulting legal teams to prevent the moving ahead of the development. “This is a site which we hold very dearly, as all South Africans, as it presents an opportunity to reconcile deep traumas that re-enter into our psyche, generation after generation,” he said.

Imam Omar prayed over the new plaque, and Turok said he was also opposed to the development.

Lyndon Khan, in mayor Dan Plato’s office, yesterday said there had been “extensive input on how the Khoi heritage of the area would be respected and memorialised”, and referenced the support of the The First Nations Collective.

Khan referred to a statement last week that the development would include an indigenous garden, cultural, heritage and media centre for the First Nations, and a heritage eco trail.

Provincial Environmental Affairs and Development Planning spokesperson Rudolf van Jaarsveldt said: “A democratic and transparent process was followed. The final appeal decision was procedurally fair and reasonable, and followed the legal requirements. There was both public support and opposition to the development, which was considered in the final decision.”