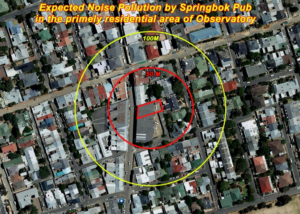 Introduction
Initially scheduled to start at 9 AM at the Western Cape Liquor Authority (WCLA) in Bellville, upon arrival with Observatory resident, Roger Norton, we were informed that it would start at 10 AM. Present was Anine Kriegler who was summoned by the WCLA as an ‘expert witness’ in her own capacity, and Warrant Officer Susan Muller.

Proceedings
At 10 AM we entered the Tribunal room and were introduced to the panel (​seated on a staging area). They were a ​Lieutenant General from SAPS, a Mr. Federicks (community rep), Cllr Van Rensburg, and Mr. Willemse (Chair and Convenor).
Seated in the front, to the left of the panel was Mr. Harris, the owner of Springboks flanked by his lawyer from Bowmans.
After the introductions by the chair, we were explained how the proceeding will work. Firstly, the panel would hear the applicant represented by Bowmans, then W/O Muller, Annine, myself and Roger would be called in to testify, in that order. All present were summoned by the WCLA. I was there to represent both OCA and ONW on the behest of the ONW. On Tuesday evening, at the OCA Mancom meeting, I was granted the mandate to represent OCA as well.