1. The OCA along with other partners is calling on Obs Residents to sign a petition appealling to the City not to discontinue the Public Employment Program (PEP) tackling homelessness in Cape Town. Organisations supporting programmes to address homelessness have been told that funding will be discontinued by end June.
Please sign the petition to keep our homeless in shelter this Winter and beyond!
https://chng.it/zXxn8rGxRV

A range of project in Obs kicked off this year aimed at rehousing, sheltering and upskilling people living on Observatory’s streets. There are already close to 600 clients participating in this initiative through partner organisations. We believe funds are available for projects like this to continue in Cape Town for 3 years.

In Observatory, funding has allowed OBSID to manage a work-based rehabilitation programme, with meals, travel stipends as well as psychosocial support from a Social Worker and a Community Worker. This programme offers people who have lived on the streets of Observatory for many years the chance to belong, to learn work skills, to earn a stipend and to access various forms of support including medical assistance. All 9 clients in this programme are currently living off the streets. Given more time and funding, OBSID could enrol even more people in the programme – making a meaningful difference in more lives.

One of the Obs partner organisations registered for this programme is running a supportive housing project in Observatory, currently housing 24 people who make rental contributions towards the running costs from the stipends they earn on the programme. Without these stipends, they would most likely be back living on the streets and in public spaces given the lack of suitable accommodation and shelter beds in the City.

With the arrival of winter and bitterly cold and wet conditions on the streets, it is inconceivable that the City would want to expose this vulnerable population to such a risk.
We’re begging the City of Cape Town to reconsider ending funding for this vital programme which has had significant impact in a short period of time and can do more if given the chance.
Through your support for this petition, we hoping to persuade the City to change its mind.

2. There is a very large development that has been proposed for 22 Collingwood running the length of the block between Blake and Seymour Roads. Despite comments from the OCA in 2021 raising substantial concerns with the bulk and scale of the development, the MPT approved the development with seemingly generous departures.

If you wish to appeal, then can do so by
– including the written notice (attached as Decision Appeal Right Letter.pdf)
– indicate your grounds of appeal (and not only your intention to appeal)
– Send to the Table Bay District Manager, at the following email address: appeals.tablebay@capetown.gov.za within 21 days of the date of notification of the decision (meaning the Closing Date to lodge an appeal is 03 June 2022)
– Indicate your name and address

Normally, the City would only allow those who have objected in the first instance to appeal.
However, the City’s notice to the OCA removed the identities and contact details of objectors so we have no idea who objected and who is therefore entitled to appeal.
Therefore, we are circulating this notice widely to alert anyone who wishes to appeal of the process.
If you were not an objector, you can indicate you wish to be an “intervener” under Section 89 of the Municipal Planning By Law. See page 48 of the By law here. To qualify as an intervener, you need to demonstrate that you were not been given notice of the application in terms of sections 82 or 83 of the MPBL and that will be adversely affected by the decision. You also need to submit the request to be an intervener with 7 days of your becoming aware of the decision (i.e. if you only became aware of the application in this email, then submitting an appeal by the 3rd June is within 7 days) and the request should be accompanied by your appeal.

What should you cite as reasons for your appeal?

Grounds you might consider in your appeal are listed below, and you can also look at the Objections lodged by the OCA in 2021 – but you can’t repeat the same objections, it has to be something new that was not considered.
If you want to see the full files, which are very large files, you can write to ah@obs.org.za and we can send them to you via transfer.

I appeal the decision because:
1. The proposal do not comply with Section 99(3) of the MPBL – specifically, Section 6 of the Case Officer’s report does not take account of (a) compatibility with surrounding uses; (b) impact on heritage; and (c) traffic impacts, parking, access and other transport related considerations. I will elaborate on these when the matter is heard on appeal.

2. I do not believe the application is consistent with the relevant Council policies – the impacts on the Heritage Protection Overlay Zone have not been sufficiently taken into account. I will elaborate on these when the matter is heard on appeal.

3. The proposal is presented as consistent with the Table Bay District Plan. This is a misrepresentation. While it is located within an area where land use intensification is to be supported, the Table Bay District Plan also speaks to (a) Whether the proposal, in terms of proposed use and development form, supports the overall goals for the local area in which it is proposed, as reflected by City of Cape Town policy (the property lies partly within the Observatory Heritage Protection Overlay Zone); (b) Whether the proposed land use reflects general compatibility or appropriateness within the surrounding land use context; (c) ehether there are likely to be unacceptable impacts on the environment. The Table Bay District Plan therefore also has criteria which render the application inconsistent with the plan.

5. The City’s Densification Policy is to be supported. However, as per the comment above, it cannot override other relevant considerations. In any event, Observatory is aglut with large developments and there is no shortage of accommodation in Observatory. I will elaborate on these when the matter is heard on appeal.

6. The proposed development may contribute to densification but it is in a most inappropriate manner and it adversely impacts on the receiving environment. The construction is out of synch with the heritage character of the area and will adversely impact on heritage resources. The approval pays lip service to the HPOZ, an accepted planning tool adopted by the City. I will elaborate on these when the matter is heard on appeal.

7. The proposal’s scale is completely inappropriate for the surrounding land use. I will elaborate on these when the matter is heard on appeal.

I wish to be notified of the appeal proceedings and to be given an opportunity to speak to my objections, should I wish to do so. 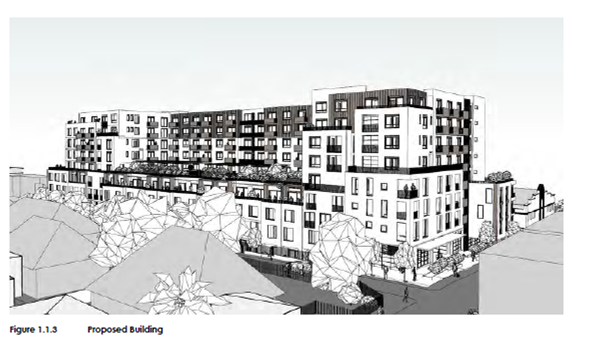 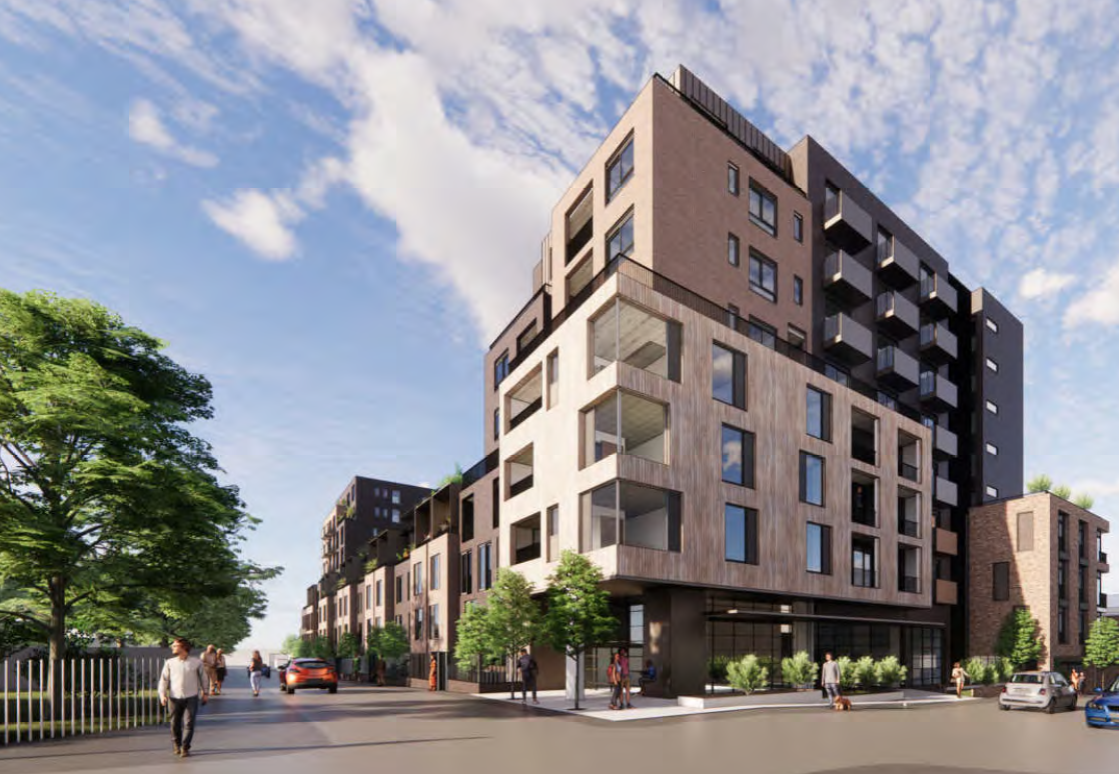 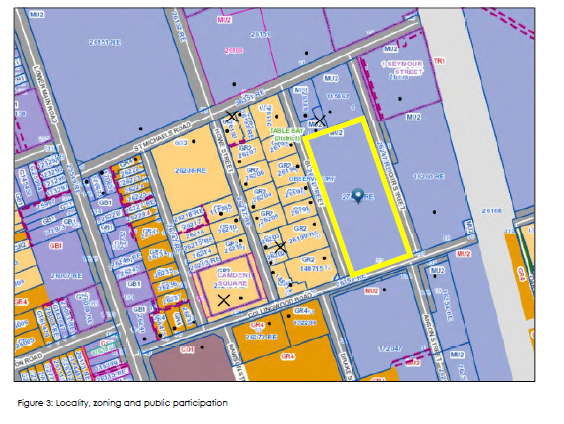 3. Lastly, an update on the River Club re-development
As most people will know, our court challenge to the River Club development is strong. Judge Patricia Goliath issued two incredibly important and groundbreaking decisions, the first awarding an interdict halting construction at the site pending a High Court review of the permissions, and affirming that economic benefits can never outweigh the rights of indigenous people to culture and heritage; and a second decision refusing the cabal of developers, City, province and the FNC leave to appeal. The FNC have now petitioned the Supreme Court in Free State for leave to appeal. We won’t ask where they get the money for such an expensive exercise, which we don’t believe will materially affect the court process – which over the next few weeks will be focused on the exchange of documents in preparation for the Review under PAJA. There is lots more info at our petition site, which is approaching 75000 signatures – please sign if you have not already done so.

Remember to Make the Liesbeek Matter! You can donate to the campaign at https://www.backabuddy.co.za/champion/project/oca-fundraiser
Or assist us financially to support the court challenges, by donating online, by EFT and by Sapscnan.