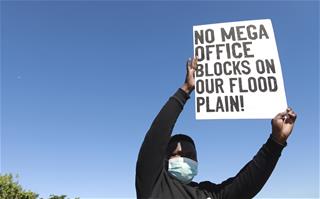 A protestor on Nov. 12, 2021, with a sign calling for a stop to tech giant Amazon building its African headquarters in Cape Town, South Africa. (AP Photo/Nardus Engelbrecht)

Thousands of years ago, South Africa’s earliest dwellers roamed the land. Now, as Amazon tries to build its new African headquarters there, it’s facing a battle from Indigenous locals who say the company shouldn’t be building on what they say is sacred land—and last week, they notched a win, if only a temporary one. Reuters reports that on Friday, the Western Cape Division of the nation’s High Court ruled that construction must stop at the Cape Town site, with Judge Patricia Goliath noting in her decision that “the fundamental right to culture and heritage of Indigenous groups, more particularly the Khoi and San First Nations Peoples, are under threat.”…